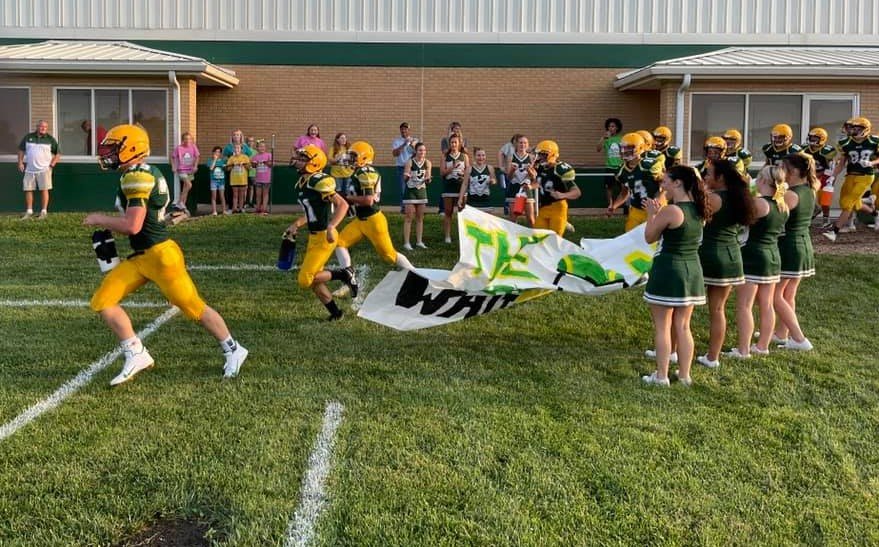 We are late to the Party and everyone makes the playoffs.

#1 Olpe is the defending state champion and looks very impressive so far this season. Uniontown has played some close games and is 1-2.  Central Heights is a surprising team this season and got some votes in our rankings. Lydon is having a down season and will make the switch to 8-man next year. Northern Heights had 1st game cancelled and is owinless on the season.  Pleasanton stayed 11-man this cycle and next and has struggled to score this season and is 0-3 .Northeast Arma cancelled its varsity season and is only playing JV.

All except Northeast Arma

5 of the 6 teams enter the district 2-1 or better. Should be some great games.

#1 Sedan is undefeated with the help of transfer Brec Long at QB. SEK #3 West Elk also is undefeated and has a big showdown with rival Sedan to open districts. #3 Yates Center is undefeated and with a win over Oswego can clinch first league title since 1970.  Marmaton Valley is 2-1 and can score points. Oswego is 2-1 and has been consistent the last few years. Cedarvale/Dexter enters looking for their first win of the season.

This district seems to be split down the middle but that’s why we play the game.

Chase County can score points. # 1 Madison can score and has only given up 6 points all season. Central Burden is 2-1 with it’s only loss to #1 Sedan in week 3. Flint Hills opened the season with a victory but lost the last 2 to undefeated and ranked teams.Udal  jumped into the win column last week after struggling to score in the first 2 weeks. Oxford enters winless on the season  but has played a difficult schedules

Keep up with the district races with our friends at Kpreps

Very balanced district and should be competitive.

Colony-Crest enters 2-1 and has been able to score, lone loss is to undefeated and SEK ranked Yates Center. Waverly started out 2-0 with 2 great wins and a close loss to Lebo, they will move to 6-Man next cycle. St. Paul had a shootout with Oswego to gain their only win. Has played a tough schedule early. Altoona-Midway is winless and scoreless this season and will also move to 6-man. Cheptopa is 0-3 after forfeit week 1, also a SEK team moving to 6-Man.  SOuthern Coffey County is 0-3 and also moves to 6 man next year.

Only two SEK Sports teams in this district and district schools have found it hard to get games in. We will just highlight the two teams.

Lebo looks to be the class of the district with the lone loss coming to a good Chase County team. Hartford scored 100 in the first game but has dropped last 2 against #1 Madison and a good Burlingame team.

Keep up with the district races with our friends at Kpreps