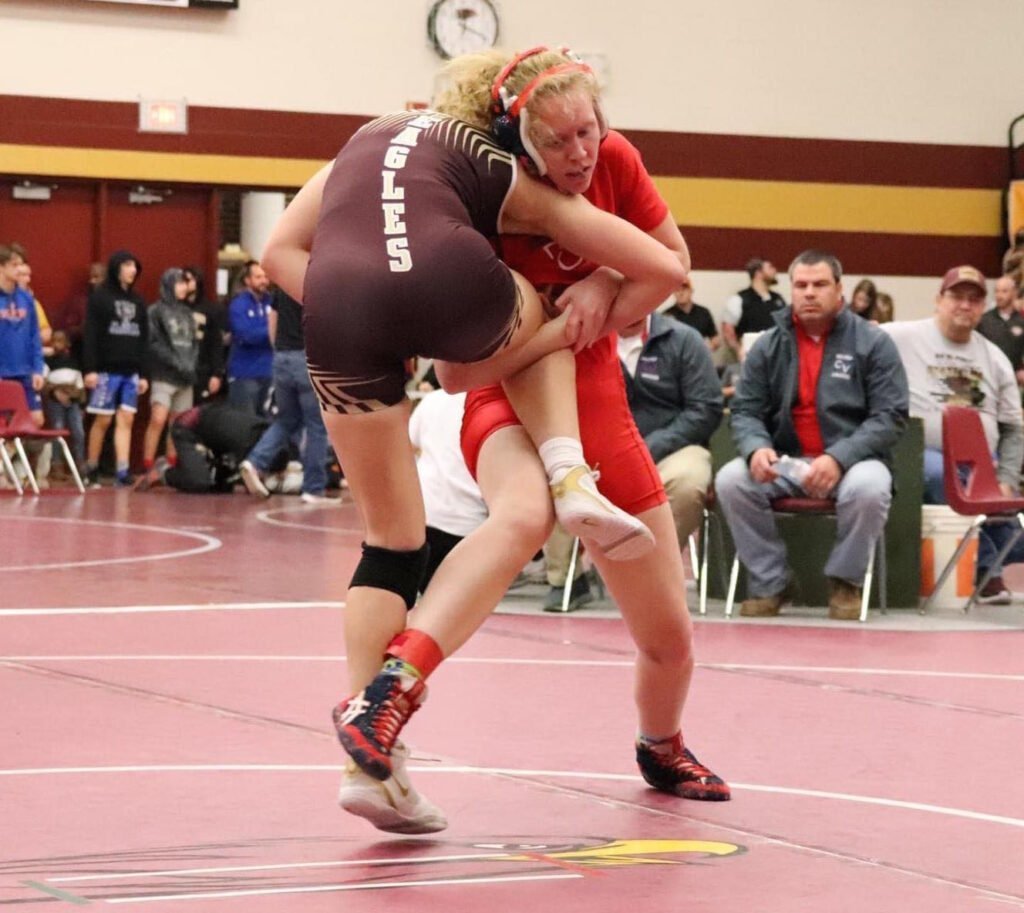 CANEY — With girls’ wrestling making its debut as an official sport in the state of Kansas in the winter, Caney Valley High School senior Cassidy Anderson will go down as one of the pioneers of the sport.

“I think all the girls who have been wrestling were pioneers,” Anderson said. “Even the ones that only did it a year before it got sanctioned. We had to prove there was enough numbers for girls’ wrestling in the state of Kansas for it to be a high school sport. I don’t know that I would have kept wrestling if it wasn’t for a lot of the older girls I saw wrestling.”

When the Kansas State High School Activities Association sanctioned girls’ wrestling last summer, it definitely opened some doors for Anderson and other girls throughout the state.

“I was pretty excited,” Anderson said. “When I was little, I was fine with wrestling boys because they weren’t stronger than me. But once I got to high school, it didn’t really matter if I knew more than them because most the time they were way stronger than I was. Getting to wrestle girls was pretty awesome. I’m glad to see the sport grow. Wrestling is amazing, and girls should have the same opportunities the boys get.”

Anderson made the most of her senior season with the Bullpup wrestling program. She captured the 136-pound championship at the inaugural Tri-Valley League Ladies Wrestling Championship in Caney. Later, ranked No. 2 in the state in her weight class, she finished as the runner-up in the All-Class East Regional Tournament in Paola to land a spot at state.

Although she had aspirations of claiming a state title, she went 2-2 in her bracket to finish in fourth place at the Girls’ Wrestling State Tournament in Salina. That capped off a 28-4 season for Anderson. She was named All-Area First Team by the Montgomery County Chronicle and Prairie Star newspapers.

“(State) was really cool,” Anderson said. “It was crazy to think that we were the first girls to ever wrestle at a real state tournament. I finished fourth in the state, which isn’t really where I hoped to place. I was a little disappointed that I didn’t do better. However, I was very happy I placed. I feel like not finishing the way I wanted really pushed me in my decision to wrestle in college though. I guess not doing the way I wanted in the end was probably for the best.”

Originally, Anderson did not plan on competing in sports in college, but she eventually decided to sign a national letter-of-intent to continue her wrestling career at NAIA Central Christian College in McPherson, majoring in Elementary Education.

“Honestly, I didn’t think I wanted to wrestle in college at all,” Anderson said. “Then after state, the coach contacted me, and I was kinda interested. Then after softball ended and I had been stuck in the house for about two weeks, I realized I wasn’t ready to be done with athletics. I was in contact with two other schools … one of which was about six hours away, and I really didn’t want to move that far away. Plus, I loved the fact that Central was a Christian school, and I knew that’s where God was calling me to.”

Anderson saw most of her athletic success in wrestling, but she was looking forward to competing on the Caney Valley softball team this spring. Unfortunately, due to the ongoing COVID-19 pandemic, the season was cancelled … meaning her athletic career had come to an abrupt halt.

“Softball has probably been the sport I’ve had the most fun doing in high school,” said Anderson, who was a .270 hitter a year ago with nine singles and a double in 37 at-bats as a junior. “Pretty much all of my friends play, so we joke around a bunch. I was pretty upset and, to be real honest, for awhile I was stilling hopeful that we would be able to come back. Every time I drive into town from my house, I drive right by the field. It’s just upsetting to think last year at regionals I played my last high school softball game and had no idea. I know God has a plan in all of this though, and I look forward to continuing my athletic career next year wrestling in college.”

In addition to wrestling and softball, Anderson was also a runner for both the cross country and track and field teams. She was a four-year competitor in cross country, qualifying for state two times. She also earned All-Tri-Valley League honors all four years, while the CVHS girls’ squad placed second twice in the TVL. She also ran the two mile in track as a freshman, qualifying for state, before electing to switch over to softball.

“Some of the best memories I have athletic-wise is hanging out with the cross country team,” Anderson said. “We were kind of a weird bunch, but we always had fun. I didn’t really enjoy the running part of cross country. I just liked the team and the coach. Plus it kept me in shape.”

Outside of sports, Anderson has been active for four years in Future Farmers of America (FFA) — two of those years as President — as well as National Honor Society.

Like all seniors, Anderson was stunned when in-person classes came to an end in March, meaning she had roamed the hallways of Caney Valley for the final time as a student.

“It’s sad to think I’ll probably not talk to half of my class ever again,” Anderson said. “But I know I’ll still talk to a majority of my group of friends. It’s been hard not spending the night at each other’s house every weekend and hanging out at school, but quite a few of us FaceTime each other. Hopefully soon we will be able to hangout.”

Anderson is anxious about ending her high school career with graduation, whenever that date comes. In the meantime, she can reflect on what has been a successful four-year run at Caney Valley High School.

“I felt like we were all a big family,” Anderson said. “The school is always really supportive of anything that its students do, and so is the community. At my school, you know pretty much everyone in your class and in the whole school. You also get really close to your classmates because most of you have known each other since kindergarten.”

A LITTLE MORE ABOUT CASSIDY ANDERSON …
SEK-SPORTS: What are some of your interests and hobbies away from school?
ANDERSON: “I like camping, fishing, and going to the lake. I also enjoy raising my chickens and telling the best jokes.”

SEK-SPORTS: Who is your favorite athlete? Favorite sports team? Favorite music group/singer?
ANDERSON: “Boomer Sooner all the way. If I had to pick a favorite singer it would be old Taylor Swift, more specifically the song ‘You Belong With Me.’”

SEK-SPORTS: Who are the people that you look up to as far as role models?
ANDERSON: “As far as teachers and coaches, I’ve always really looked up to (Josh) Kristalyn. He has been my cross country coach for three years, and I’ve had him as a teacher since eighth grade. He gives amazing advice, and I’ll really miss him being my coach.”

SEK-SPORTS: What is a fun fact about you that people may or may not know?
ANDERSON: “I have a twin sister, but we look and act nothing alike. So when I tell people, they never believe me.”