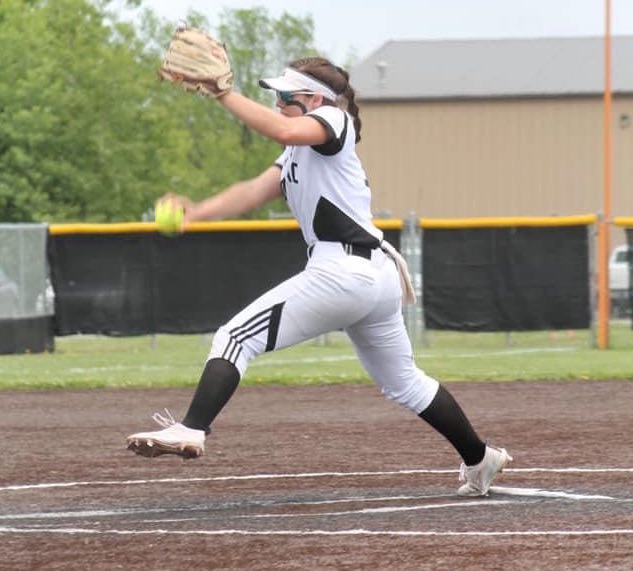 FRONTENAC — For any high school senior, that final game of their career can be an emotional one. Yet the 2020 calendar year has been anything but a normal experience for Frontenac High School’s Karma Fields.

As a member of the Lady Raider basketball team, she was a key figure on a squad that reached the semifinal round of the Class 3A State Tournament in March. But after a first-round overtime victory over Jefferson West, the unthinkable happened.

Due to the COVID-19 pandemic, the remainder of the state tournament was cancelled … crushing the hearts of Frontenac in pursuit of a championship.

“At state, I was so ready to play, and our game was a tough fight,” Fields said. “We had girls doing things for us that we hadn’t seen most of the season, and it helped us greatly. The game was very intense, and we ended up winning in overtime. After the win, we were all so excited because we had gotten the first-game jitters out of the way and were ready to make some more noise.

“About 10 minutes after the celebration is when we found out the tournament was being cancelled. It was honestly heartbreaking. When my dad called us back to tell us the news, you could just see it by the look on his face. We all lost it. Even though we never got to finish the season, and we may never know what would have been, we did get to end our career on a win at the state tournament, which most people don’t get to say.”

What made the heartbreak of that experience even more difficult was the fact that it proved to be the final athletic competition of her high school career. Weeks later, the Kansas State High School Activities Association cancelled the entire spring season due to the pandemic. And that meant that the Frontenac softball team would not be able to defend its Class 3A championship on the field.

“We only got one day of just hitting and everybody wasn’t even there, so we never got to practice as a full team,” Fields said. “However, we had high expectations set for this year. Our ultimate goal was to be back-to-back state champs, and everybody was bought in and willing to put the work in to reach that goal. At state basketball when we found out, we just kept saying ‘they can’t cancel softball … they can’t cancel softball’. A couple days later, we heard the news.

“When I heard the news that spring sports were cancelled, it was just as heartbreaking as basketball. I lost it. The senior girls and Cassie met up, and we just spent some time together cheering each other up trying to brighten the mood. The hardest thing is we had big goals and plans. I understand nobody has control over what is going on, but this was like the final goodbye to our senior year. Looking at the positive side of things, we can say we went out as 3A state champs, and nobody will be able to take that away from us.”

When the calendar year changed to 2020, Fields was definitely looking forward to her final semester as a high school athlete. Her Lady Raider basketball team was on its way to a 22-2 season, which included an undefeated CNC League championship and the Class 3A Galena Sub-State title. FHS advanced to Hutchinson for state and picked up a 42-40 overtime victory over Jefferson West in the opening round to reach the semifinals.

Although her season was cut short, it was another standout campaign for Fields. A 5-5 point guard/shooting guard, Fields averaged 12.5 points, 5.0 rebounds, 1.4 assists and 1.3 steals per game. A Sports in Kansas Player of the Year nominee and two-time First Team All-CNC selection, she was named All-Class 3A First Team by SIK, Second Team by The Wichita Eagle and Third Team by The Topeka Capital-Journal. Prior to that, she was also All-CNC and All-State Honorable Mention by SIK as a sophomore, as well as SIK All-State Second Team as a junior.

“I never felt like there was a lot of pressure on us to win or anything, but we all knew we wanted to and everybody was competitive,” Fields said. “Knowing it was my last year and my last year having my dad as my coach, I knew I wanted to make it to state and do big things at state. I strongly believe we could’ve won. It wouldn’t have been easy, but I think the team we had would have pulled through and been able to do it. We won the first game without playing as well as we could’ve, so I think that helped show us that we could win.”

Although the basketball team can only envision what could have been at state, the Lady Raider softball team already knew it was a state champion heading into this spring.

A year ago, Frontenac captured the regional championship en route to a 20-6 record and title at the Class 3A State Tournament. Despite being the No. 8 seed in the bracket, the Lady Raiders won all three of their state games, capped off with a 7-5 victory over Silver Lake in the final. It was the second state championship in program history — both coming in a four-year span.

“We were like a huge family,” Fields said. “We enjoyed being around each other, so there wasn’t any drama to interrupt our season or our play. We also had the heart needed to win a state championship. There wasn’t one person that could make or break the team. We needed everybody, and everybody was willing to give all their effort.”

Fields was dominant in the circle as a pitcher. In 109 1/3 innings pitching, she had a 2.05 earned run average while going 14-4 with one save. At the plate, she posted a .484 batting average and .519 on-base percentage. She finished with 46 hits, including seven doubles, six triples and seven home runs, while also recording 56 RBIs and 36 runs scored.

“We had an okay offense, but what I think was one of the biggest keys to our success was our defense,” Fields said. “As a pitcher, I didn’t have to worry about trying to strike out every batter. I just had to focus on getting the ball to the half of the plate I was asked to, and I could just trust my defense behind me to make the play. That is one of the best feelings in the world when you can rely on your teammates to have your back. We all just had a very strong connection, and it honestly felt like a family on the field.”

Fields had plenty of postseason honors after that state-championship season. In addition to being named All-CNC and All-Class 3A First Team at pitcher, she was chosen the Sports in Kansas 3A Player of the Year. She was also selected as The Joplin Globe Spring Player of the Year and was on the Best of Kansas Prep All-Star and Elite teams. That came after she had previously been named All-CNC First Team and Sports in Kansas All-State Second Team as a junior.

Although much of her success was in basketball and softball, Fields was also a key piece to the Frontenac volleyball team this past fall that went 39-7. The Lady Raiders captured the Class 3A Frontenac Sub-State championship en route to a trip to the state tournament in Hutchinson.

In addition to athletics, Fields has been active at Frontenac High School in S.A.F.E. (Seats Are For Everyone), Interact, HOSA for future health professionals, and “Uncommon Athlete” — a group where students discuss how to improve school culture. She was also vice president for National Honors Society and earned Kansas Scholar Honors with a 4.0 grade point average.

Fields will be continuing her softball career at Crowder College in Neosho, Mo. She was also recruited by Labette and Fort Scott community colleges, along with a couple of NAIA schools.

“One thing about Crowder is they play a very full schedule, and they have a very good and successful reputation, which is what I wanted in a school I chose to play at,” Fields said. “They expect a lot out of you, but they also are going to be there for you if you need them. When I went and did a workout with the team, the girls were also very welcoming. I felt like I had known them for awhile, when in reality I had just met them. Overall, I just felt comfortable at Crowder. I knew they have a successful team, and it reminded me of Frontenac.

“I have been very fortunate to have been surrounded by such great coaches — one of them being my father for basketball and softball — and teammates. We all got along so well and had fun but knew when it was time to be serious and focus, and that is what helped lead us to be so successful. Everybody was so hard working and went all out all the time.”

Fields’ final days at Frontenac High School were definitely unusual due to the pandemic, but she said she will always have fond memories of being a Raider.

“When you are a Raider, you play for more than just yourself and your team,” Fields said. “You’re playing for your whole community, and trust me, they will be there cheering you on through it all. You need to play with class but still be a competitor. When you’re playing at a small school like Frontenac, you are a superstar to every little kid that goes there and you need to remember that on and off the court/field because they will be watching. I have so many amazing memories at Frontenac, but the best thing in the world is when you get to see all the support that the community and school gives you. Frontenac has a great culture, and I am so glad I got to grow up in it. Once A Raider … Always A Raider.”

A LITTLE MORE ABOUT KARMA FIELDS …
SEK-SPORTS: What are some of your interests and hobbies away from school?
FIELDS: “Outside of school, I spend a lot of time being active by practicing softball or shooting hoops. Also, I enjoy spending time with my friends and family and just having fun.”

SEK-SPORTS: Who are the people that you look up to as far as role models?
FIELDS: “I look up to Sis Bates and Haley Cruse in the softball aspect of life because they always look like they are having so much fun while playing the game. and they give it their all … all the time. I also look up to my mom because she is such a strong, loving woman who has done so much for me and my family. I hope to be half as good of a mother as she is one day.”

SEK-SPORTS: What is a fun fact about you that people may or may not know?
FIELDS: “I got my name from a basketball article that my mom was reading that was about a team having good karma.”