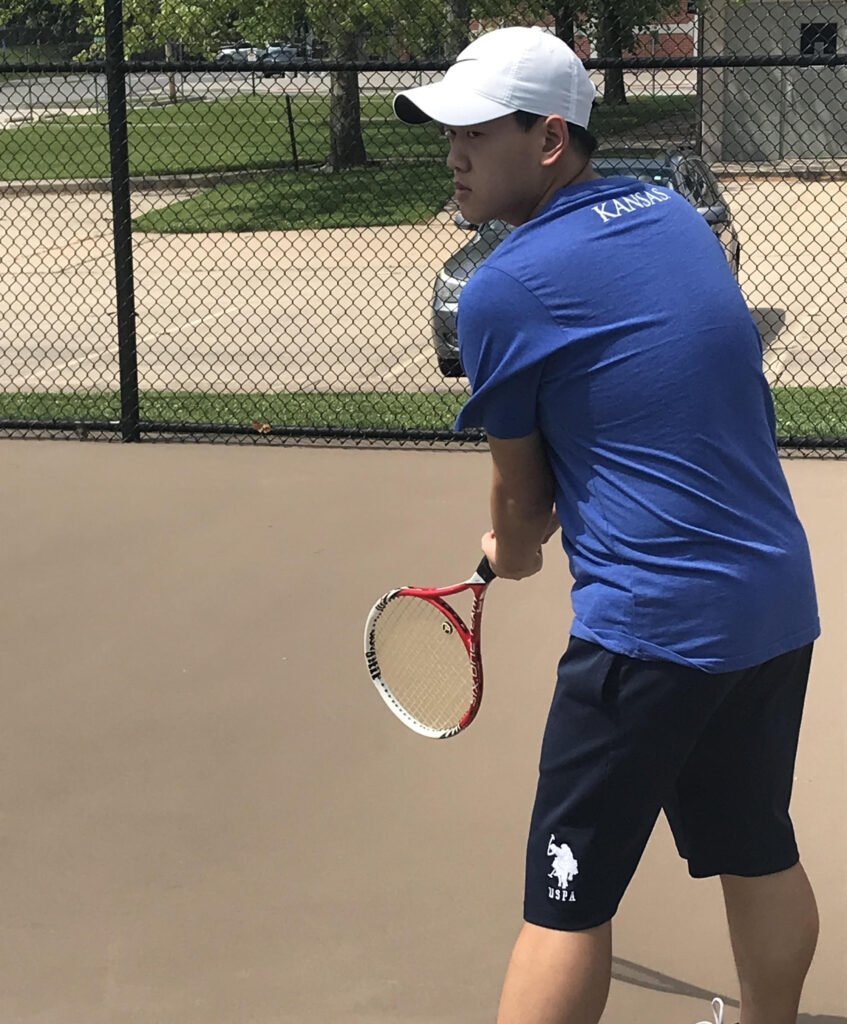 INDEPENDENCE — Graduation is an accomplishment for any high school student as it is the celebration of a long journey from child to adulthood. Of course, receiving a diploma — whenever that may come due to the ongoing COVID-19 pandemic — has a little extra special meaning for Independence High School senior Samson Mah.

Midway through his high school career, Mah was dealt with a serious blow in his life with the passing of his father, Peter, following a long bout with cancer.

“It was heartbreaking,” said Mah, who played on the IHS boys’ tennis team throughout his four-year high school career. “He had cancer for a number of years, so we knew it was an inevitability, but his passing was still a monumentally difficult time for our family. Being in high school during this time, I would say it was very beneficial. My teachers and administration allowed me a lot of time off to deal with the grief and his affairs and were overall immensely accommodating in a way that I’m not sure would have been granted of me had I been in college or as a full-time worker. My classmates were also there for me as a collective shoulder to cry on.

“My dad was always there to both cheer me on and to push me forwards. I remember that my teachers would always tell me that at parent-teacher conferences he would always ask what he could do to help me with furthering my education. The motivation that comes with him passing is much the same as it was when he was here. My dad made it a priority to always show his pride for my accomplishments and that he always had my corner. Even now that he’s gone, I still feel that same level of support, and I’ll do everything in my power to make sure he can always be proud of his son.”

Mah would admit that his primary focus in high school was never on athletics, despite having some success playing Bulldog Tennis.

A year ago, he was a member of a squad that captured a share of the Southeast Kansas League championship with Parsons and also won the Class 4A Chanute Regional championship. At the Class 4A State Tournament in Pratt, Independence took seventh place overall as a team.

Individually, Mah saw plenty of success on the tennis court. He teamed up with Ryan Stoner to claim the No. 2 doubles championship at the SEK Tournament and finished third place in doubles at regional competition in Chanute. That allowed him to qualify for state for the first time in his high school career. Mah and Stoner went on to split their four matches at state and finished their doubles season at 14-5 overall.

“Two things stick out as being super memorable during my junior season,” said Mah, who had previously finished in third place at No. 2 singles at the SEK Tournament as a sophomore. “The first was a knee injury that I sustained at the very first tournament of the season. It was my last match of the day, and I hadn’t won a single match at the tournament. I was up against my opponent and went for an unnecessary shot when my knee jerked and gave out under me. I was devastated. I thought I had destroyed my entire season. I ended up missing about two to three weeks of action, including some major tournaments, but managed to come back into a great season, including a 10-match win streak heading into regionals.

“The second thing was qualifying for state. My sophomore year, I had been knocked out of regionals during the first day. I was crushed, especially when all of my teammates made it through. Last year, though, I was ecstatic about being able to make it through with my doubles partner, Ryan Stoner, along with the rest of the team. Given that neither of us had previous experience at state, we had a pretty decent run. Unfortunately, that same knee injury proved disastrous again when it buckled during our top-12 qualification match and cost us a medal. This doubly sucked because, in a sort of repeat of my sophomore year, the rest of the team did earn medals.”

That seemed to motivate Mah during the offseason as he was hoping to cap off his Bulldog career with a successful senior season. IHS was seeking an eighth consecutive SEK team championship and was hoping to once again qualify all six individuals for state competition.

“I think any team has the aspiration of earning a plaque at state,” Mah said. “Indy Tennis is much the same in that regard. We’ve had our core team since my sophomore year and have consistently posted better and better results at state. My sophomore year we only earned one point at state. Last year, we placed seventh as a team. Especially given the fact that much of 4A retired large portions of their teams, we had a real shot at going far in the state tournament this year. That would’ve been in addition to our SEK League Tournament and regionals, which we took first at last season and would’ve likely done again this season.”

Unfortunately, all of those dreams were dashed when the season came to an abrupt halt. Due to the ongoing pandemic, the Kansas State High School Activities Association cancelled the spring season after the Bulldogs had competed in only one tournament in March.

“We had just finished the second week of practice, and both the coaches and the team had felt great about the start of the season,” Mah said. “Of course, we had kind of talked about COVID, but mostly as a ‘what-if’ scenario and never very seriously. I think I was mostly resigned to the whole thing. On one hand, this is the greatest health concern many of us have ever dealt with and the actions and precautions we took were in the best interests of not just the tennis team but for our town and Kansas as a whole. But I would be remiss if I didn’t feel at least a little selfish. This was my senior year … my last chance as a player to make my mark on Indy Tennis history. I really, really wish I could’ve experienced and savored my last season, but some things are just more important.”

Although Mah missed out on a senior season of competition in tennis, his entire high school academic career was full of accomplishments. His list of school organizations included Student Council President, National Honors Society President, Scholar’s Bowl captain, Orchestra associate concertmaster and Spanish Club member. He was also an AP Scholar with honors, a Kansas Honor Scholar, recipient of a National Merit Scholarship Letter of Commendation, Governor’s Scholar and on the Principal’s Honor Roll all four years.

Of course, one of his greatest accomplishments may be coming at the end of his senior year. The straight-A student is currently in the running for the honor of Valedictorian for the Independence Class of 2020. IHS recently announced that it is planning on a more traditional graduation ceremony on June 28 … pending any further state guidelines due to the pandemic.

“Academics has always been my driving force, even before high school,” Mah said. “I always saw being valedictorian sort of as the cherry on top for a successful school career thus far. Because of that, my reaction is probably less of spontaneous excitement and more contentment or fulfillment at a job well done.”

Mah’s athletic career has come to an end as he will be focusing all his attention on academics in college. He will be attending the University of Kansas’ Honors College in the fall, majoring in Human Biology. His focus will be on pre-med to prepare for medical school as he hopes to one day become a physician, possibly in cardiology or oncology.

In the meantime, Mah will have many positive moments to look back on during his time at Independence High School.

“To me, being a Bulldog means holding myself to a higher grade of excellence,” Mah said. “It means conducting myself with the utmost behavior … both academically and civically. It represents a storied history of great minds and athletes, and a tradition of success. Sure it sounds cheesy, but looking back at everything I’ve accomplished, I’m proud to be a Bulldog.”

A LITTLE MORE ABOUT SAMSON MAH …
SEK-SPORTS: What are some of your interests and hobbies away from school?
MAH: “I love to spend time in the kitchen cooking, playing video games with friends, and spending time with family.”

SEK-SPORTS: Who are the people that you look up to as far as role models?
MAH: “My parents by far. They’re the hardest working people I know and have always been my biggest supporters. Any and all of my successes I can attribute to their great parenting.”

SEK-SPORTS: What is a fun fact about you that people may or may not know?
MAH: “I’m a great whistler, but I’m horrible at trying to snap.”